The Taliban Celebrate Victory, With a Crisis Looming 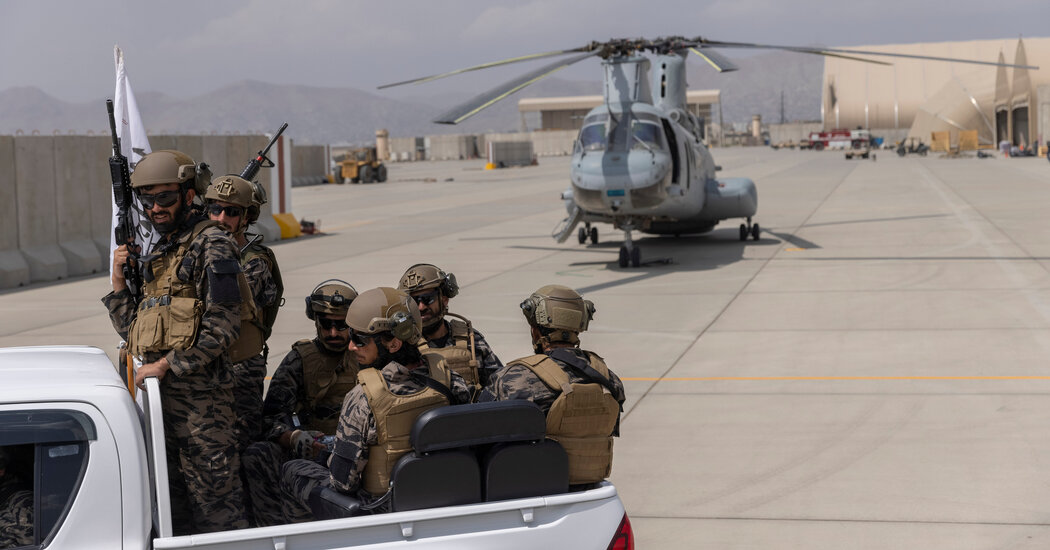 KABUL, Afghanistan — The Taliban celebrated a complete victory on Tuesday, achieving a goal they had nurtured through two decades: the exit of the last U.S. soldier from Afghanistan.

The Taliban’s control had been essentially true for days, or even weeks, as whole cities fell to the insurgents one by one, and an American military that once flexed its muscles across the entire country was reduced to overseeing a hasty evacuation from the airport in Kabul.

But on Tuesday, the airport, too, was in the hands of the Taliban. It offered an irresistible stage — and they made full use of it.

“We have been fighting for this day for the last 20 years: to end this war and attack of foreigners on us and bring our own Islamic government,” declared the Taliban’s spokesman, Zabihullah Mujahid, standing on the tarmac from which the last U.S. plane had departed only hours earlier.

Mr. Mujahid, flanked by other Taliban officials and fighters from the group’s elite unit, led journalists on a tour of the abandoned airport, which until the day before had been divided into a civilian side and military one used by Western coalition forces.

The detritus told the story of another superpower whose ambitions had been dashed in Afghanistan. It ranged from suitcases and clothing scattered across a now-idle domestic terminal to military vehicles, armored S.U.V.s and even helicopters, which U.S. officials say have been permanently disabled.

More broadly, extensive damage at the airport raised questions about how soon the facility could safely be used for flights. Nearly everything within the terminal had been looted or destroyed, down to the conveyor belts. Jetways, passenger walkways and fuel trucks were all out of commission.

It was not the limited withdrawal from the country some U.S. officials had envisioned. For the first time in two decades, there are no U.S. government boots on the ground in Afghanistan.

In recent days, there was no longer talk of a contingent of military members staying behind to guard the American Embassy and diplomatic corps. Instead, the embassy has been shuttered, and Secretary of State Antony J. Blinken said this week that for now, the only formal U.S. diplomatic mission for Afghanistan would be based in Qatar.

At the airport on Tuesday, the group’s spokesman was careful to congratulate all Afghans. “This victory belongs to us all,” Mr. Mujahid said.

In a speech to Americans on Tuesday afternoon, President Biden was unable to declare victory, but he cast the evacuation campaign, at least, as an “extraordinary success” and defended his decision to pull the U.S. military out of Afghanistan.

“I was not going to extend this forever war,” he said.

For the Taliban, any celebration is likely to be short-lived. It is up to the Taliban to govern now, and the country they have claimed is in desperate straits.

Afghanistan is deeply impoverished, with a third of its citizens struggling to survive in the face of what the United Nations calls crisis levels of food insecurity, with the prospect that the country could functionally be out of food within a month. With many state employees no longer showing up for work, basic services like electricity are also under threat.

Afghanistan has long depended on infusions of foreign aid, but it is unclear how world leaders will regard a Taliban-run government. Washington has frozen Afghan government reserves, and the International Monetary Fund has blocked its access to emergency reserves.

Mr. Mujahid appeared eager to change that on Tuesday.

“I invite you all to come and invest in Afghanistan,” he said. “Your investments will be in good hands. The country will be stable and safe.”

As the Taliban work to form a new government, its forces are still trying to put down armed resistance in some parts of the country, including Panjshir Province. Fighting between the Taliban and government holdouts was reported on Tuesday, even as some Taliban officials said they were trying to reach a negotiated peace with the forces there, including some of the remnants of the Afghan Special Forces.

Many Afghans simply want out of the country.

However hard the Taliban have worked to rebrand themselves as more moderate than they were when they last ruled, two decades ago, there have already been ominous signs since they took control of the capital city on Aug. 15.

Many Afghans well remember the 1990s, when the Taliban stripped away basic rights for women like education, and encouraged floggings, amputations and mass executions.

After Kabul fell just over two weeks ago, more than 123,000 people were evacuated from the country, but with the withdrawal of U.S. forces, the flights have ended.

On Tuesday, Taliban officials repeated earlier assurances that Afghans with passports and visas would be allowed to leave, regardless of their role during the American occupation. Some Americans — the figure has been put at under 300 — also remain in Afghanistan, some by choice and others because they were unable to make it to their airport.

Many of the stranded Afghans — thousands, by some estimates — are permanent United States residents who were traveling in Afghanistan when it fell with astonishing speed to the Taliban as U.S. forces began pulling out.

Among them was Samiullah, a Philadelphia resident who waited days and nights with his wife and son outside the airport in Kabul in the hope that a place could be found for them on a flight. On Monday, they gave up and returned to their apartment in Kabul.

“All flights are closed,” he said, incredulously. “I am scared.”

Taliban leaders promised that the airport would reopen within days. But extensive damage to the buildings, equipment and leftover aircraft there left that estimate in doubt. Qatar and Turkey were said to be in discussions with the group about whether they would help operate civilian flights from the airport.

That may help the Afghans who want to leave, or with bringing in badly needed humanitarian aid. But for the Taliban, the more immediate problem may be winning over the vast majority who are staying and who fear the weeks and months ahead.

“People’s expectations have grown dramatically after the past 20 years of freedom and liberation,” said Saad Mohseni, owner of Tolo, Afghanistan’s largest broadcaster. “And the pain is yet to come. Will the Taliban engage the world with a more inclusive approach? Or will they return to the ways of the past?”