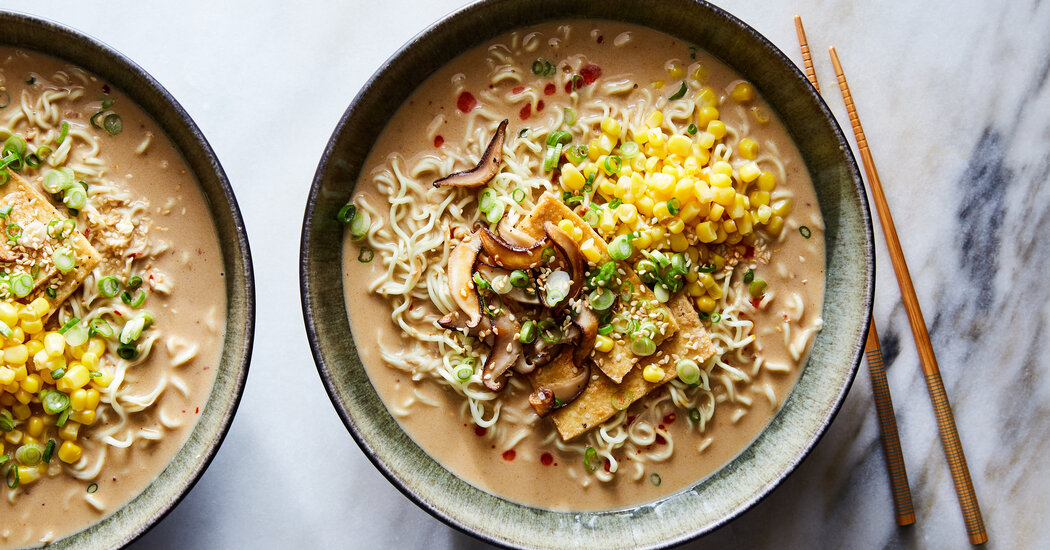 With most ramen, the work that’s put into the broth is what makes all the difference, providing the foundation for the entire dish. A broth made with pork, chicken or seafood can be cooked for up to three days, resulting in an intense, velvety soup that sings with complex, multilayered flavors.

So it may feel unfair to stack a quick-cooked vegan broth up against a meaty one that has been toiled over for dozens of hours. But the creamy, meatless broth behind tantanmen stands up formidably to the challenge, coming together in little time without sacrificing flavor or body.

Tantanmen, which finds its origins in the Sichuan dish dan dan noodles, derives its power not from a labored broth, but from a mildly sweet soy milk base combined with flavorful seasonings, which the Japanese call tare.

Here, buttery Chinese or Japanese sesame paste, which has a richer and more robust finish than tahini, is paired with soy sauce, rice vinegar, chile oil and sugar to impart earthiness to the broth. Doubanjiang, the spicy sauce from Sichuan composed of fermented fava beans and a local variety of chile known as er jing tiao, is often included for depth and extra heat, so feel free to add a couple of tablespoons, to taste, if you have some on hand.

As is often the case in food, the best dishes are defined by balance. Tantanmen is no exception, getting its roundedness from kombu, or dried kelp. While optional, its addition softens any sharp flavors and quietly amplifies other ingredients without overshadowing them. Simply add a piece to your vegetable stock as it heats up, and, in less than 10 minutes, it will taste more savory, slightly sweeter and fuller bodied.

The options for toppings are many and varied, but it’s always a good idea to add some protein. Tantanmen is normally made with pork or chicken, but this vegan version relies on hearty, satisfying tofu and doesn’t compromise taste or heft. The simple method used here calls for pan-frying thick slices of seasoned tofu, which can be used in salads (simply cut the slices into triangles or strips), tacos, veggie burgers, or served with brown rice and a peanut sauce.

Corn provides a sweet counterbalance to the deeply savory broth, while shiitake mushrooms absorbs and intensifies the thick broth’s flavor.

Once your broth and noodles are in the bowl, don’t hang around. This fast dish is best eaten with a sense of urgency: Take cues from Japanese diners, and give yourself five minutes to slurp it all up to avoid the utter joylessness of soggy noodles.

New York City diners have seen their social media feeds flooded in recent days with announcements from restaurant after restaurant that they were...
Read more
Food

The Most Common Wine Questions, Answered

How to Decant Wine With SedimentDrinking sediment is not harmful, but it’s unpleasant, like having a mouthful of grit. To decant, make sure...
Read more
Food