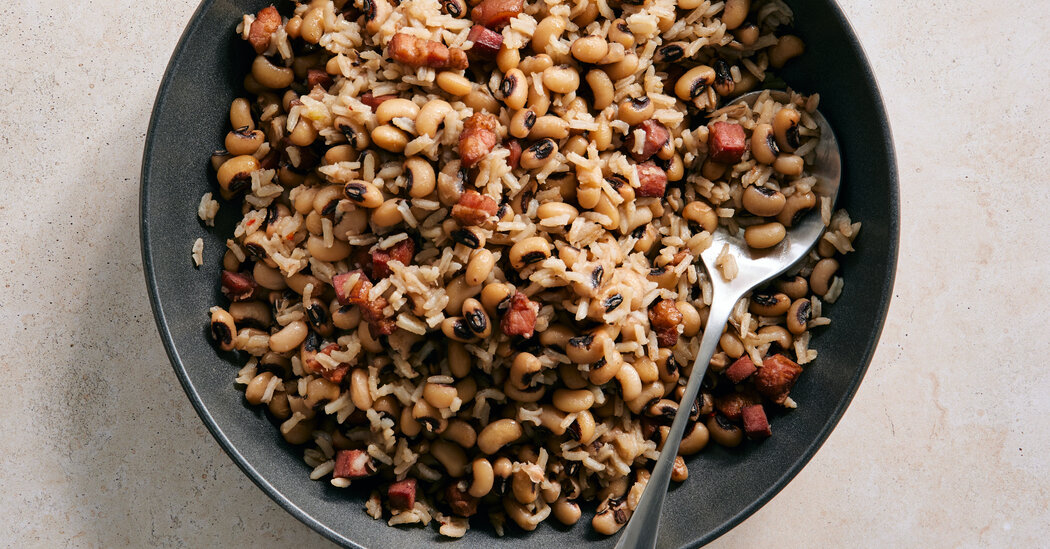 On New Year’s Day, Black American families around the country will sit down to eat a variation on green vegetables and cowpeas, joining in an enduring tradition meant to usher in opportunity in the year ahead.

“I don’t let a New Year’s Day go by without having some form of greens, pork and black-eyed peas,” the food historian Jessica B. Harris said.

The choice of greens, usually cooked with pork for flavor, comes from the perception among Black Americans that folded collard greens look like paper money, said Adrian Miller, an author and food scholar. Eating greens on New Year’s Eve or New Year’s Day is believed to bring about greater financial prosperity. The peas promise good luck, health and abundance.

But while these rituals have become largely associated with the American South, their roots can be traced back to the meeting of West African and European traditions, Mr. Miller said. Collard greens, for instance, originated in Northern Europe.

“Collards is a corruption of colewort — colewort is any non-heading cabbage,” said Dr. Harris, the author of “High on the Hog: A Culinary Journey From Africa to America.” “They became part of the foodways of African Americans. The Africanism is in the cooking of them — not in the green itself. That cooking method of long, low and slow, and with the potlikker being consumed, is a very different thing.”

And celebrating on the first day of the year, is more of a global tradition, Mr. Miller said. In Italy, for example, lentils — said to resemble coins — are cooked down with pork and served for luck. In West Africa, he added, “there were certainly auspicious days. But this idea that the first day of the calendar year — and doing something on that day — would bring good luck, to my knowledge, doesn’t exist in West African societies prior to European contact.”

West African spiritual practices often revolved around deities who had favorite foods like black-eyed peas, which are native to the continent. The forced migration of enslaved Africans to North America and their interactions with European colonists led to a convergence of customs.

“It’s all kind of messy,” Mr. Miller said, “but you can see this process of cultural diffusion, borrowing, appropriation, all of those things that were happening in previous centuries, to the point where it coalesces into the tradition we have now.”

Geography also played a role in the variety of interpretations that emerged. In regions of the country influenced by the British, collards or kale might be served on New Year’s Day, while in states like Louisiana, where there was a stronger German influence, people often enjoyed cabbage. As white Americans looking to take on a wholly American identity began to reject European customs, Black people found ways to transform those customs.

“When people abandon superstitions because they just seem antiquated, that creates a space for new associations to emerge,” Mr. Miller said.

Black and Southern traditions eventually became inextricable. The first documented Black New Year’s celebration is recounted in Toni Tipton-Martin’s “Jubilee: Recipes From Two Centuries of African American Cooking.” In the book, she shares the origins of Watch Night, when Black Americans congregate at church for song, praise and prayer before the stroke of midnight. During the first such event, on Dec. 31, 1862 — or Freedom’s Eve — enslaved people in the South Carolina Lowcountry gathered in churches to await news of their freedom under the Emancipation Proclamation, which was to be signed on New Year’s Day 1863. Their celebrations included a menu of Hoppin’ John, collard greens with hog jowls, and ribs.

“My point in publishing these stories in ‘Jubilee’ was to be able to tell a broader story about African Americans and New Year’s Eve,” Ms. Tipton-Martin said. “This allows you to see strains of African tradition in things we think about as classic America.”

The blurring of what Ms. Tipton-Martin calls “good-luck food traditions” can lead to erasure.

Amethyst Ganaway, a Lowcountry chef and writer, notes that people often refer to black-eyed peas and rice and Hoppin’ John interchangeably. Both make appearances on Black American tables, but Hoppin’ John is a one-pot meal of rice and field peas — a variety of cowpea that’s largely available only in the Lowcountry. It is also a bit lighter and redder, and has a creamier consistency, than its black-eyed cousin.

“It’s important to make that distinction, because it’s really the origins of those traditions get lost,” Ms. Ganaway said. “So many people think that Gullah Lowcountry traditions and people are dying off. No. We’re here.” She added, “It actually starts here, and it’s important to remember that it starts here for a reason, so our identity, our foodways aren’t being erased and turned into this mainstream thing.”

Though New Year’s culinary traditions persist across the South, Frederick Opie, a professor of history and foodways at Babson College in Massachusetts, noted that they can take on particular significance for Black Americans.

“Is there a correlation between a society or a culture that has experienced a larger-than-usual sense of being oppressed and marginalized, and that the hope for the next year means possibly experiencing something better? I suspect that there is,” he said.

How people celebrate the New Year is also essential to bringing in good will. Dr. Harris hosted parties for nearly two decades in the 1980s and ’90s, serving a good-luck menu to as many as 70 guests in her Brooklyn home.

“It was a grand thing to do, and I very much enjoyed doing it,” she said.

Black Americans have found celebration in other foods, too. JJ Johnson, the chef and owner of Fieldtrip in New York, takes guidance from his grandmother, a North Carolina native, when he prepares her seafood gumbo — with a few alterations — on New Year’s Eve.

“I was taught that if you were eating good going into the new year, then you would be good, and you will be healthy,” Mr. Johnson said. “For me, a gumbo like this represents family, luxury and joy.”

Though the menus may vary, the purpose is the same.

The tradition has “lived on because it’s fun, and it speaks to aspiration,” Mr. Miller, the food scholar, said. “You always hope that no matter what your condition is, that there’s always a brighter future.”

If you are preparing this seafood gumbo as a New Year’s celebration and want to stick with sparkling wine throughout the meal, why not? This gumbo should go beautifully with sparklers, whether Champagne or the many others that come from around the world. You could also pair this with many different white wines, like riesling (dry or moderately sweet), albariño, various chardonnays, Loire Valley sauvignon blancs, chenin blancs or even white Bordeaux, so long as they are well balanced and not oaky. I would consider many dry Italian whites. The spicier the gumbo the better a slightly sweet wine will be, like a kabinett or spätlese riesling or a demi-sec Vouvray. I wouldn’t pick a red, but if you insist, look for something fresh and light, like a Beaujolais or Beaujolais-Villages. ERIC ASIMOV

How Will Americans Eat Next Year? Food Predictions for 2022

Last year at this time, optimistic trend forecasters predicted that the cork would burst from the bottle by summer. With vaccines in arms,...
Read more
Food