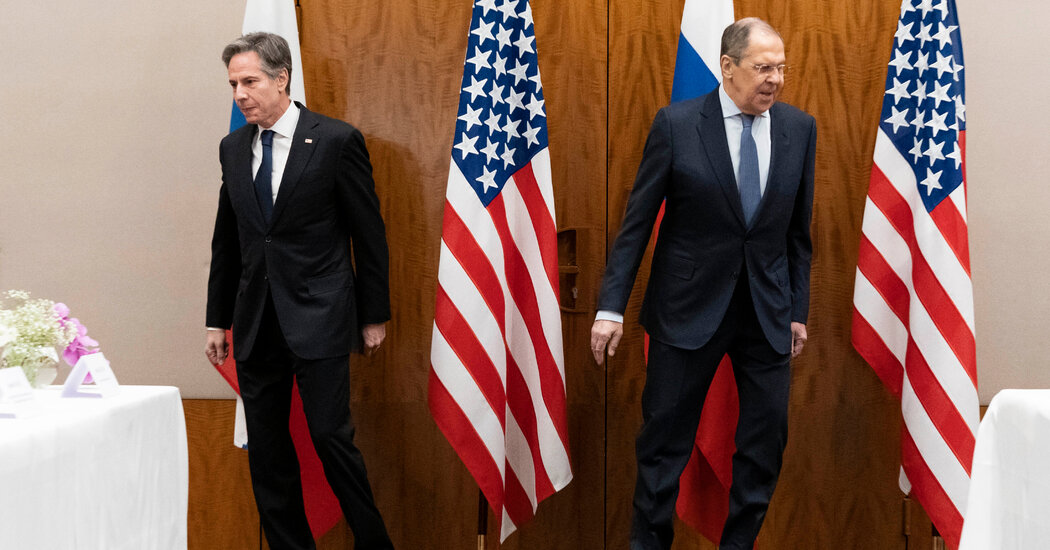 GENEVA — The United States and Russia scaled back their confrontational rhetoric over Eastern European security on Friday, agreeing to extend negotiations as the Biden administration pursues a fragile diplomatic path to averting a Russian invasion of Ukraine.

Secretary of State Antony J. Blinken told his Russian counterpart, Foreign Minister Sergey V. Lavrov, in a hastily scheduled meeting in Geneva that the United States would provide written responses next week to Russia’s demands that the West unwind its military presence in Eastern Europe.

Both sides said that the two diplomats planned to speak again after that, and they left the door open to another conversation between President Biden and President Vladimir V. Putin to try to resolve the crisis.

Even as the threat of a Russian invasion remained real, the conciliatory tone and absence of ultimatums suggested that both sides were trying to keep tensions in check and give diplomacy time to play out. And the longer negotiating timeline stood in contrast to Mr. Biden’s comments two days earlier when he said he believed Mr. Putin was ready to use military force.

“We didn’t expect any breakthroughs to happen today,” Mr. Blinken told reporters after the meeting. “But I believe we are now on a clearer path in terms of understanding each other’s concerns.”

Mr. Lavrov described the talks as “a useful, honest discussion,” while Mr. Blinken called them “direct, businesslike” and “not polemical.” Mr. Lavrov largely refrained from the heated language that other Russian officials had used after previous discussions this month, and he told reporters that Mr. Blinken had agreed “that it is necessary to have a more reasonable dialogue.”

“I hope the emotions subside a bit,” Mr. Lavrov said.

Still, Friday’s meeting was only one moment in a crisis, redolent of the Cold War’s worst times, that has been gathering for weeks. Analysts said the risks of a Russian invasion of Ukraine had not abated, with troops, tanks and missiles continuing to be shipped across Russia toward the Ukrainian border.

Sam Charap, a Russian security analyst at the RAND Corporation, said war was still not inevitable — but that he did not see any new signs on Friday, despite the softer rhetoric, that Russia or the United States was ready to compromise on key issues that have proved intractable in previous negotiating sessions.

“It doesn’t look like either side is particularly interested in moving off the positions they were on a week ago,” Mr. Charap said.

Russia’s demands include a legally binding agreement to halt NATO’s eastward expansion, and a withdrawal of NATO troops from countries like Poland and the Baltic nations that were once aligned with or part of the Soviet Union. The United States has dismissed those proposals as nonstarters, and Mr. Blinken reiterated after Friday’s meeting that Ukrainians had a “sovereign right” to “write their own future.”

“There is no trade space there — none,” said Mr. Blinken, who completed a whirlwind diplomatic trip to Europe on Friday, after stops in Kyiv and Berlin.

Still, Mr. Blinken said he believed there was a way to develop agreements with Russia “that ensure our mutual security.” In Washington, Jen Psaki, the White House press secretary, said Mr. Biden would travel to Camp David with his national security team this weekend to discuss the situation.

“We will also continue to consult with our allies and partners and we will respond next week in writing,” Ms. Psaki said.

Western officials had been watching the talks and hoping that a more measured approach would emerge. One note of optimism came from the United Nations secretary-general, António Guterres, who was asked about the prospects of a Russian invasion of Ukraine in the hours after the Blinken-Lavrov meeting had concluded.

“I am convinced it will not happen, and I strongly hope to be right,” Mr. Guterres told reporters at a news briefing at the U.N. headquarters in New York. Mr. Guterres did not explain his reasons for taking that position.

In and around Ukraine, tensions continued to rise. Russia’s ferrying of more troops, armor and advanced antiaircraft systems toward Belarus, a Russian ally, put a growing force within range of Kyiv, the Ukrainian capital.

And the United States has authorized Estonia, Latvia and Lithuania to send Stinger antiaircraft missiles to Ukrainian forces, augmenting the Javelin anti-tank missile deliveries to Ukraine that Britain began this month. The State Department also confirmed this week that the Biden administration had approved an additional $200 million in defensive military aid to Ukraine, atop $450 million in the past fiscal year.

The delivery of the stinger missiles would be a potent symbolic gesture from the United States. The C.I.A. provided the weapons systems to mujahedeen fighters during the Soviet war with Afghanistan in the 1980s, allowing them to shoot down hundreds of planes and helicopters and precipitate the eventual Soviet withdrawal.

Still, after weeks of heated words, there were signs that both sides were trying to keep tensions in check and give diplomacy time. Their agreement on Friday to keep negotiating extends a run of talks that started on Dec. 30 with a phone call between Mr. Putin and Mr. Biden, and continued with a series of three meetings across Europe last week that provided no breakthroughs but kept Russia from declaring it had no choice but to use force.

It is unclear who might benefit more from a delay if Russia does eventually invade Ukraine — a decision that American officials believe Mr. Putin has not yet made. The United States might welcome more time to rally and coordinate allies and plan contingency options. But the Russians may value the appearance of an extended, good-faith diplomatic effort before any potential invasion, and may use the time to mobilize more troops.

Mr. Blinken’s acknowledgment that the United States would provide a written response to Russia’s demands was the clearest the Biden administration has been that it would fulfill this request. Senior American officials said that the Kremlin’s insistence on written responses reflects the centralized nature of a system in which Mr. Putin holds overwhelming power and the government bureaucracy has limited influence. They believe Mr. Putin wants to see America’s specific position with his own eyes.

Mr. Lavrov repeated Russia’s denials that it had any plans to attack Ukraine and said he and Mr. Blinken had agreed to speak again after the United States provided its response. Mr. Putin has warned that Russia would take unspecified “military-technical” actions to ensure its security if the West did not agree to its demands.

“I can’t say whether or not we are on the right path,” Mr. Lavrov said. “We will understand this when we get the American response on paper to all the points in our proposals.”

Mr. Biden prompted some diplomatic blowback on Wednesday when he said that a “limited incursion” by Russia into Ukraine could prompt arguments among NATO members about a proportional response. Mr. Biden clarified the comment on Thursday, insisting that any Russian military move into Ukraine would provoke “a severe and coordinated economic response.”

Mr. Blinken echoed that position on Friday. But when asked about Mr. Biden’s early-December declaration that he considered the direct involvement of American troops to be “off the table,” Mr. Blinken did not waver from that line.

“It is our determination to do everything we can to to defend it and to prevent or deter aggression directly toward it,” he said of Ukraine. But because Ukraine is not a NATO member, a status which under the alliance’s Article Five would legally commit America to its military defense, Mr. Blinken made clear that devoting American forces to a conflict is not an option. “It’s not covered by the Article Five commitment,” he said.

U.S. officials had expressed low expectations for Mr. Blinken’s meeting with Mr. Lavrov, and in brief remarks beforehand both envoys expressed little hope for a breakthrough.

Still Mr. Blinken has voiced some optimism. On the car ride to the meeting with Mr. Lavrov at a waterfront hotel, Mr. Blinken noted whitecaps on a blustery Lake Geneva, according to a senior State Department official. He told his colleagues that he hoped the meeting would calm the waters.

Reporting was contributed by Michael Schwirtz from Kyiv, Steven Erlanger from Brussels and Rick Gladstone from New York.