Home Food Versailles Cuban Restaurant Is a Hub for Protesters in Miami, but Why?
Food

Versailles Cuban Restaurant Is a Hub for Protesters in Miami, but Why? 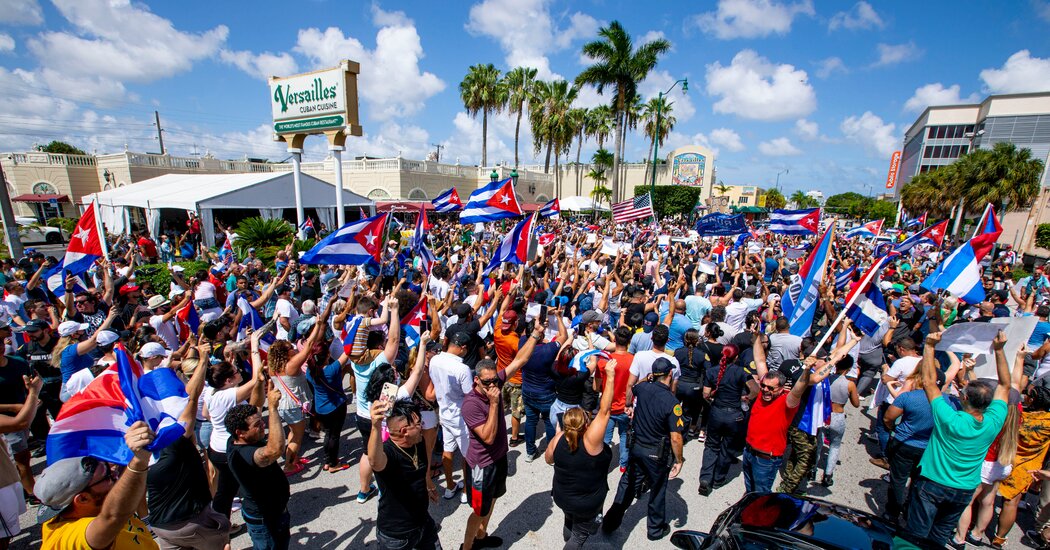 MIAMI — Outside Versailles Restaurant, on Calle Ocho, near Miami’s Little Havana, thousands of protesters have gathered in the last two weeks, waving red, white and blue flags — Cuban and American — in the pouring rain and the suffocating humidity.

In front of the self-proclaimed “world’s most famous Cuban restaurant,” Cuban exiles and Cuban Americans show their support for Cubans on the island who have denounced the Communist government and protested shortages of food and medicine in the biggest movement in decades.

They chant “Patria y Vida” (“Homeland and Life”) and bang on pots as cars stuck in traffic honk in support. All of the ruckus can be heard inside the restaurant.

Versailles has been a community landmark for 50 years, and it has attracted marches, protests and celebrations of major Cuban American news events for decades. The crowds are nothing new. Protesters have long replenished their energy with café Cubano and guava-and-cheese pastelitos from the ventanita, the restaurant’s tiny service window.

The recent protests in Cuba have brought renewed hopes for the fall of Communism in Cuba — and fresh urgency to the crowds outside Versailles.

“They overwhelm our parking, they overwhelm all the blocks around,” said Felipe Valls Jr., the owner of Versailles and La Carreta, a local chain of Cuban restaurants. “For us, sale-wise, it affects us tremendously with negative sales, but we do it with pleasure because we’re proud to be the point of all things Cuba.”

Opened in 1971 by Mr. Valls’s father, Felipe A. Valls Sr., Versailles was designed by a relative of the Cuban American rapper Pitbull and named after the palace in France for its ornate décor of elaborate gilded mirrors and chandeliers.

When protests in the 1980s and 1990s brought crowds of more than 100,000 marchers to Calle Ocho and Little Havana to fight for human rights in Cuba, Versailles was a gathering place.

Thousands have rushed to Versailles, banging their spoons on pots and pans, to celebrate events like the Florida Marlins’ 1997 World Series victory and the death of Fidel Castro in 2016. Crowds gathered here during the custody battle for Elián González who was found off the Florida coast in 1999 and when former President Barack Obama moved to restore full relations between the United States and Cuba.

So, when anti-Communist protests broke out in Havana and elsewhere in mid-July, Versailles was the natural home for supporting marches stateside.

“You knew where everyone was going to be celebrating, and it’s here,” said Sophia Pardo, 24, who was born in the United States to Cuban parents and grew up going to Versailles.

“It’s the feeling of home, you know you’re going to find like-minded people,” said her sister, Natalie, 30. “It’s a place to unite, for better or for worse.”

Versailles is close to several cities in Miami-Dade County with large Cuban populations, including Hialeah, Westchester and Coral Gables.

“One of the draws of Versailles is that even though people are protesting serious things: human rights in Cuba, abuses, democracy, there’s also a sense of celebration,” said Dario Moreno, an associate politics and international relations professor at Florida International University’s Cuban Research Institute.

But, he pointed out, “We’re human beings, we’re social creatures, so having people share our political beliefs or the same cause whether it’s the Miami Heat or democracy in Cuba, you’re drawn to it.”

Versailles is often the first place for Cubans to eat at with their families when they have recently arrived. Luwiz Leiva, 48, first found out about the restaurant in 2003, soon after he came to the United States from Cuba.

“A Cuban goes where the Cubans are,” he said in Spanish.

Versailles has also become a critical campaign stop for local and national politicians. Such political visits started in July 1977, only a few years after the restaurant opened, when the former Florida governor Bob Graham, a Democrat, was vying for office. He had pledged to work one day at 100 jobs during the campaign, and one of those was as a busboy at Versailles. Mr. Graham filled water glasses and wiped down tables.

“Do you serve on the right or the left?” he asked a busboy named Ramon Perez, according to The Miami News. “It doesn’t make any difference,” Mr. Perez replied.

Versailles served as an early hub for the first Cuban American politicians running for the Miami City Commission, such as Armando Lacasa, Professor Moreno said. Maurice Ferré, a Puerto Rican and the first Latino mayor of Miami also frequented the restaurant.

Several presidential candidates have made their rounds and drank tiny cups of coffee. Former President Donald J. Trump reportedly left an $83 tip on coffee and pastries.

“We don’t play parties,” Mr. Valls said. “Every representative of every political party is welcome here to make their statements.”

Many of the protesters at Versailles are conservative, white Cubans. Although Mr. Trump lost Miami-Dade County in both 2016 and 2020, he is still a significant figure for those gathered at the recent protests. Some wore red “Make America Great Again” hats while cheering and waving flags with Mr. Trump’s face on them. Others held a banner insisting that Mr. Trump won the election and shouted, “Real freedom starts here in the United States of America.” The Proud Boys, an organization with links to white supremacy, have also been a presence on Calle Ocho, led by Enrique Tarrio, a head of the group who identifies as Afro-Cuban.

Because of the restaurant’s reputation as a gathering place for Cubans, reporters often go there to check the pulse on Cuban American issues. Consequently, the views of some Afro-Cubans can go underrepresented.

“It still doesn’t feel like their space even though there are more politically diverse folks that are protesting,” said Danielle Clealand, an associate professor and political scientist at the University of Texas at Austin. “Historically, Black Cubans have been invisible in Miami. As far as Cuban protests, it’s still considered by many as an anti-Black space.”

Leilani Bruce, 27, who grew up in South Florida and is Cuban and Jamaican, said she’s never gone to the restaurant to protest, especially after she said she witnessed racism from conservative Cubans during Black Lives Matter protests.

“I’ve always seen it as the place where super right-wing Cubans go to voice their opinions,” Ms. Bruce, the founder of a book club about race in Cuba called Candela, said about the restaurant.

But ultimately, there are fewer Afro-Cubans descending on Versailles because waves of Cuban immigration largely brought more white islanders to settle in Miami, said Monika Gosin, an associate professor and the director of the Latin American Studies program at William & Mary in Virginia.

But the demographics of the Versailles protests are beginning to change. Abuelos and abuelas are becoming outnumbered by the middle-age Cuban exile customers and children and grandchildren born in the United States.

“This is the place where Cubans feel they’re with their community,” Martha Alvarez, 80, who was with protesters across the street from Versailles, holding a containers of leftovers, said in Spanish. She brought her 34-year-old daughter to support the restaurant during the protests. “It makes me proud to see so many young people here.”

Magín Pérez Ortiz, 60, an Afro-Cuban artist, said that though the customer base at the restaurant reflects Cuba’s long history with race and immigration, it doesn’t deter him.

“It’s not the politics of the restaurant,” he said in Spanish. “This is a division coming from Cuban history.”

“You kind of have a temporary family you are having Christmas dinner with,” said Ms. Fanjoy, 48. Each holiday season, she hangs a...
Read more
Food

For many of us, getting a home-cooked dinner on the table after a long day is a tiny miracle, so choosing a dish...
Read more