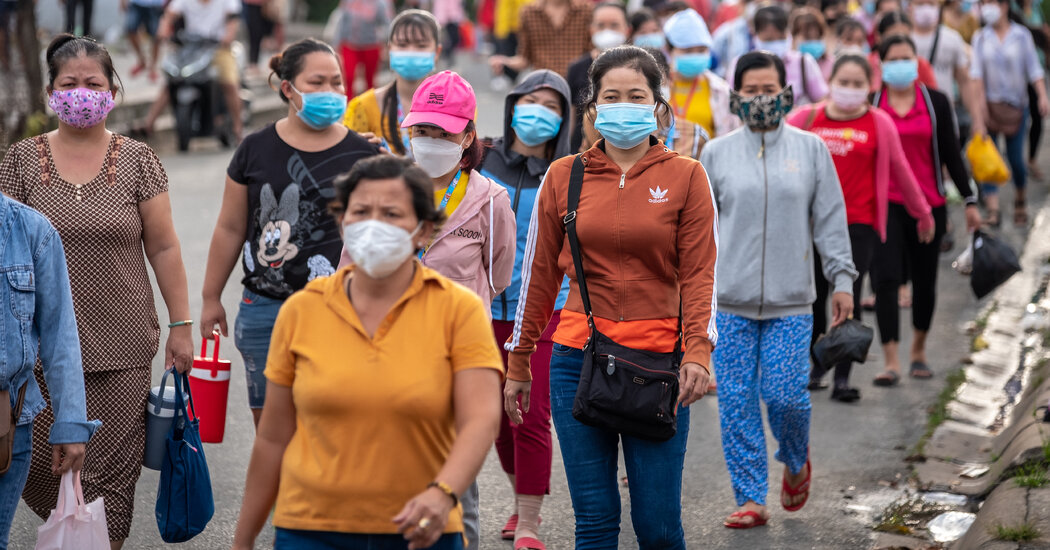 Thu Trang traveled to Ho Chi Minh City, Vietnam, in 2019, ecstatic to get a job at a factory. She worked eight-hour shifts and was guaranteed overtime pay, and the wages were nearly triple what she had made as a farmer back home.

But during a Covid-19 outbreak this summer, the factory where she worked making Adidas, Converse and New Balance shoes virtually shut down. She and her co-workers were forced to live in a cramped apartment for nearly three months, subsisting on a diet of rice and soy sauce. In October, when restrictions loosened as global supply chain issues surged, Thu Trang decided she would pack up and return to her home province, Tra Vinh.

Her manager promised her higher wages, but she didn’t bother to find out how much.

“Even if the company doubles or triples our wages, I insist on moving back home,” said Thu Trang, who asked to be identified only by her first name because she feared retribution from her company and the government. “Ho Chi Minh City was once a destination where we sought our future, but this is no longer a safe place.”

Just last year, Vietnam’s coronavirus controls were lauded by health officials around the world. The country was so successful that it achieved the highest economic growth in Asia last year, at 2.9 percent. That outlook has dimmed: Workers have fled their factories, managers are struggling to get them back, and economists are forecasting that a full recovery in output won’t come until next year.

For consumers, the worker shortage is likely to worsen the delays for global manufactured goods caused by a worldwide shipping crisis and monthslong factory shutdowns in the Southeast Asian country. It could mean a longer wait for Nike sneakers, Lululemon yoga pants and Under Armour tank tops before the holidays. Several American retailers have already switched to suppliers in China to ease the crunch.

In 2020, Vietnam kept a lid on infections. Officials relied on strict quarantine measures, contact tracing and lockdowns. They assumed that they had time to order vaccines, until infections and deaths surged in the summer with the arrival of the Delta variant.

Officials in Ho Chi Minh City and Binh Duong told factories that workers had to comply with the “three on site” model, which meant that eating, living and working needed to be done within the factory’s premises.

Factory managers scrambled to provide tents and toilets for their workers, who were crammed in warehouse buildings or parking lots. Local media reported that hundreds of workers in several factories became infected. Many businesses felt they could not bear the costs of housing their workers, so they shut down production. Suddenly, thousands of workers found themselves with no income.

Do Quynh Chi, director of the Research Center for Employment Relations, which researches labor trends in Vietnam, said 60 percent of the 300 workers she interviewed in the last week of September told her they wanted to return to their home villages after realizing they lacked a safety net in the city.

“They want to recover emotionally,” Ms. Do said. “After 10 weeks of lockdown, they are totally exhausted.”

The problem has shaken an industry that has grown to become the world’s second-largest supplier of apparel and footwear after China. In the past decade, international brands flocked to Vietnam, drawn by a relatively stable government, low costs and workers who were renowned for their sewing skills.

In recent years, the country was also a beneficiary of the U.S.-China trade war, which forced American companies to look elsewhere for their overseas manufacturing operations.

The labor shortage today is most keenly felt in the south. Known as the “locomotive” of the country, Ho Chi Minh City and Binh Duong Province are home to two of Vietnam’s largest industrial parks. Roughly 1.3 million workers left for their hometowns from July to September, according to government data.

After restrictions were loosened in October, “hundreds of thousands” of workers followed, according to local officials.

In Ho Chi Minh City, the total number of workers in export processing zones and industrial parks is now about 135,000, down 46 percent, according to Pham Duc Hai, a senior official in charge of Covid-19 prevention efforts in Ho Chi Minh City.

Managers have made calls promising higher wages to get the workers to return. On Oct. 22, the Ho Chi Minh City government said it would provide free transportation and accommodations for the first month to workers who were willing to come back.

The measures have had some success. Ninety percent of the work force of Pouyuen Vietnam has returned to Ho Chi Minh City, according to Cu Phat Nghiep, the chairman of the company’s trade union.

But Doan Thi Bich Tram has made up her mind not to come back. “Why would we stay after they had left us in our most difficult time in the midst of the pandemic?” said Ms. Doan, 29, who sews gloves for the Hung Way factory, a supplier to Patagonia and other brands.

Ms. Doan said that when the government imposed coronavirus restrictions, she went days without food and received only about $130 for August and September from local authorities. The subsidy was not enough for her to pay rent. She said she was waiting for the company to approve her resignation.

“My trust in the authorities has vanished,” she said. “They failed to control the pandemic effectively, causing many to die from infection and to live in hunger.”

Retailers in the United States have warned about the production delays in Vietnam, which could affect the deliveries of gifts during the Christmas season.

Nike cut its 2022 revenue growth forecast, saying in September that it had lost 10 weeks of production because 80 percent of its footwear factories were in the south of Vietnam and nearly half of its apparel factories in the country were closed.

On earnings calls, Chico’s, a women’s clothing maker based in Florida, and Callaway, the golf company, said they had moved some of their production out of Vietnam.

Adam Sitkoff, the executive director of the American Chamber of Commerce in Vietnam, said many companies were looking for workarounds and other remedies to help ease the stress.

“American companies are seeing what they can do,” Mr. Sitkoff said. “If we charter buses and send them to whatever province and hometown, will that help us get the people back?”

American businesses have pushed the Vietnamese government to speed up its vaccine program, which they say is essential for workers to feel safe. Only 29 percent of the population has been fully inoculated, one of the lowest rates in Southeast Asia. Vietnam says it hopes to fully vaccinate 70 percent of its population by the end of the year.

Nguyen Huyen Trang, a 25-year-old worker for Changshin Vietnam, a major supplier for Nike, is fully vaccinated but said she still feared being back on the factory floor. Ms. Nguyen and her husband returned to their home in Ninh Thuan, a province in central Vietnam, from Dong Nai when cases there started soaring at the end of July. Her husband wants to go back to the city, but her family is pressuring her to stay.

She said her manager called her in October and offered to increase her wages if she returned. Her response, she said, was “a definite head-shaking no.”

Recognizing that reality, state officials in recent years have gone back to encouraging the use of small-scale energy systems. To manage the supply...
Read more
Business

The Federal Reserve took its most aggressive step yet to try to tame rapid and persistent inflation, raising interest rates by three-quarters of...
Read more
Business

HAILEY, Idaho — Robert Kraft, the owner of the New England Patriots, flies in a Gulfstream G650. So do Jeff Bezos and Dan...
Read more