War and Strife Have Come to Prosecco Country 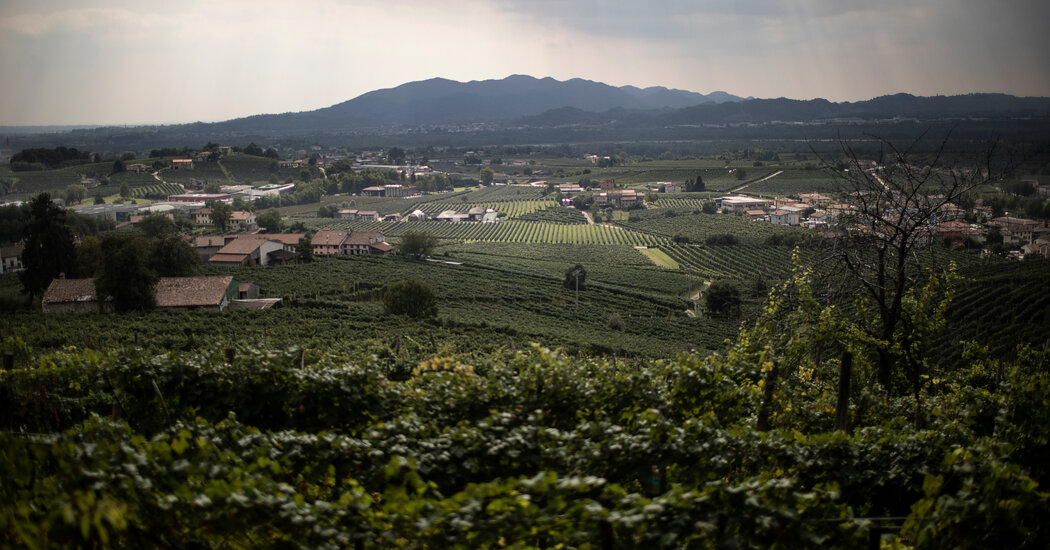 But behind the effervescent front, producers of Italy’s wildly popular sparkling white wine in the northeastern Veneto region were on war footing.

“I feel like I’m going to battle,” said Elvira Maria Bortolomiol as she pantomimed carrying a rifle in an airy tasting room next to her vineyards. An owner of the Bortolomiol winery and new president of a consortium of producers, Ms. Bortolomiol said a surprise attack had “disoriented us.”

War and internal strife have come to Prosecco country. The European Union, in a major buzz kill for a Spritz-fueled multibillion euro industry, last month agreed to consider a longstanding application by Croatia to recognize Prosek, a method of making an obscure sweet — and still — dessert wine of the same name.

Big Prosecco has fought off myriad other salvos — counterfeits like Meer-secco and Cansecco, and the warnings of British dentists about sugary spumante rotting the country’s teeth. But tiny Prosek, a legitimately old wine from an E.U. member state, presented a unique threat.

A significant slice of the Italian economy is built on typically Italian products with names, and sounds, protected from imitation. If the E.U. allowed Prosek today, producers argue, could Farmesan be far behind?

And so Prosecco producers and local officials have joined Italy’s government to crush Prosek. The argument is that recognition by Brussels would confuse consumers and set a dangerous precedent.

“Recognizing Prosek could legitimize a ton of other products that are imitations,” said Luca Giavi, the president of the Consortium to Protect Prosecco.

As if demonstrating the yield of a D.E.A. drug bust, he put seized Romanian “Pro-Secco,” a 10-pack of glitter “Prosecco Bath Bombs” and Prosecco Princess Shower Gel on the table of his headquarters. “The important thing is to have an enemy,” he said. “It unites us.”

In a dark and vaulted cellar under a stone Prosecco museum on the Valdobbiadene hillside, Enrico Bortolomiol — Ms. Bortolomiol’s first cousin — argued that the conflict over the Croatian wine presented a rare chance to advance a radical agenda: The time had come to ditch the name Prosecco.

The grandmaster of the Confraternity of Valdobbiadene — a hallowed society of Prosecco makers from the wine’s traditional home on the Valdobbiadene and Conegliano hills — Mr. Bortolomiol, 55, wore a heavy white fustian cloak, black velvet cap and a gold medallion embossed with the brotherhood’s coat of arms. Around him, frescoes depicted the society’s four founding fathers knocking some chalices back with giddy medieval knights, a topless Bacchus and women in slinky togas.

With his back to dusty bottles of the hill’s best spumante through the decades, he sat with tented hands on an elevated seat and argued that the good name of Prosecco had been irrevocably sullied by overproduction on the mechanically harvested and viticulturally uninteresting provinces that accounted for 500 million of the 600 million bottles on the market.

“We have nothing to do with that,” Mr. Bortolomiol said.

“We are trying to put the name Prosecco in the background,” Mr. Bortolomiol added as a fellow knight in red robes nodded gravely.

Over the decades, Italy has given different protected geographical indications for different bottles of Prosecco depending on where they are produced. The traditional hills get a brown seal; nine new provinces where the wine is made get a blue one. The old hills get an extra G — for Guaranteed origin. The new ones don’t. But most consumers don’t know the difference; they just look for the name Prosecco.

And Mr. Bortolomiol believes there is not much left in that name.

Its purity, he said, had been contaminated by Aperol and Campari and the cloying Jolly Rancher-colored Spritzes that have conquered aperitive-hour the world over. Prosecco’s rock bottom prices were also blasphemous to the spirit of the confraternity’s founders, including his uncle and Ms. Bortolomiol’s father.

One billboard outside town advertised a bottle of Prosecco for 2.79 euros if purchased with a six-pack of canned tuna.

Mr. Bortolomiol believes Prosecco has become “a generic name” for any swill with bubbles and was no longer worth defending — from Prosek or anyone else.

His fellow knight, Daniele Buso, hopes the latest dispute will lead Prosecco producers to “an illumination.”

The only path to avoiding confusion and insultingly low prices was to break away and rebrand, putting the good stuff in bottles marked with a V, which the brotherhood happened to sell. Call it Conegliano Valdobbiadene Superior Spumante, or some permutation thereof, as long as the wine was explicitly tied to its traditional, and inimitable, territory.

For many Prosecco producers in the surrounding plains, the knights’ position is both economically suicidal and treasonous in wartime.

Croatia, argued Giorgio Polegato, the president of Astoria wines, a giant in the nearby plains, had shown “a lack of respect” in pushing its Prosek.

As mechanized harvest machines vacuumed his vineyards, he showed off enormous steel tanks, decked out, as if ready for a night out, in bright lights and stylized accessories. In the winery’s Fashion Victim Lounge, bottles labeled “Glam,” “Diva” and “Funky” stood on the glossy walls. He embraced the Spritz and attributed the wild success of Prosecco in part to its price point. He also described it as “easier to drink,” and extremely popular with Americans, Brits and the ladies.

In 2019, after an enormous lobbying effort, UNESCO declared Valdobbiadene and Conegliano a World Heritage Site.

“It changed everything,” said Marina Montedoro, a leader in that effort. She now worries that recognizing Prosek might lead tourists to accidentally go to Croatia. “It could happen,” she said.

For now, people know where to go. Two Slovakian women emerged from Valdobbiadene’s vineyards and stopped next to a couple enjoying two morning glasses of Prosecco.

“No husbands, no children, just Prosecco,” said Lucia Figurova, 33. “This place is made for me.”

That is music to the ears of Valdobbiadene’s mayor, Luciano Fregonese, who — while proud that a pope was born in the town about 700 years ago — is focused on making his community a pilgrimage site for Prosecco enthusiasts. Outside city hall — which sells wine stoppers in its tourist office — workers hammered cobblestones into a pedestrian piazza being converted from a traffic circle to make the town more inviting for an increasing number of visitors.

“The nightmare,” he said, “is that tourists drive through and see the hills and leave, like this is Jurassic Park.”

At one Prosecco bar on the square, Agostino Piazza, 22, celebrated his college graduation after completing his thesis, “Resilience of the Value Chain of Conegliano and Valdobbiadene Prosecco.”

In the brotherhood’s cellar, Mr. Bortolomiol remained convinced that the true resilience of the local sparkling wine was in its quality and disassociation from a word that had lost all meaning.

Protecting the spirit, if not the name, of Prosecco was the mission of his knights, who, he said, took a solemn pledge before a vine-shaped sword to renounce water, which brought only woe, and to exalt the local bubbly. Each new member then needed to chug half a bottle of the winner of the confraternity’s annual blind taste test.

“And then,” Mr. Buso said, “they are made a Knight of Prosecco.”

“Valdobbiadene,” the grandmaster corrected him.

How to Eat Oysters

On a recent early evening at Maison Premiere, an oyster bar in Brooklyn, I sampled five types of East Coast oysters, perched on...
Read more
Food

I used to be convinced that the only way to get truly crisp tofu was to fry it.I’d roasted it and broiled it,...
Read more
Business