What Happened at Adrian’s Kickback? 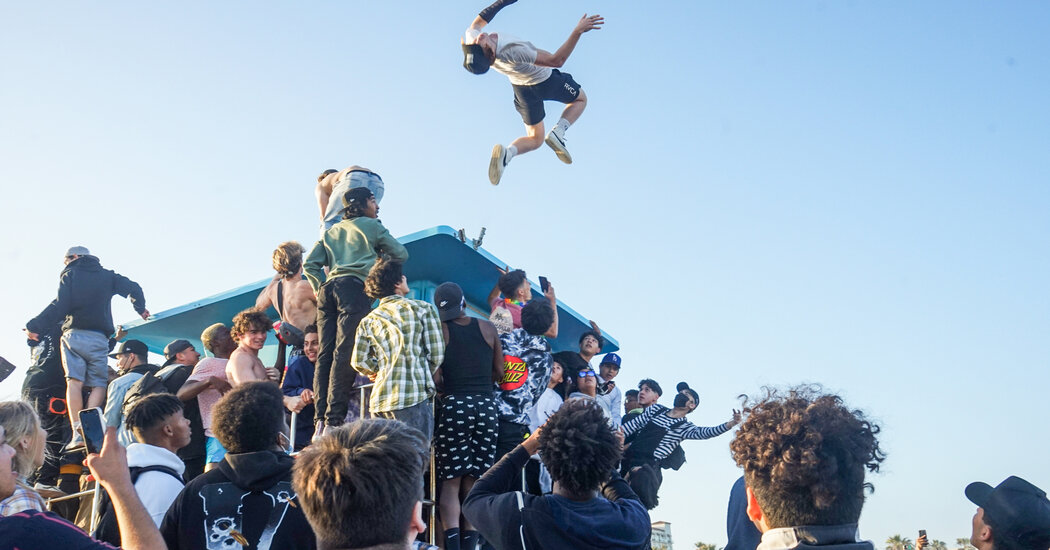 A week ago, Adrian Lopez, 17, was just an average high school student in Eastvale, Calif. But after a digital flyer he made inviting friends to Huntington Beach for his birthday went viral — to the point of attracting thousands of strangers to the beach and to an event space in Los Angeles — he’s become a household name on social media.

He made the invitation on Monday, specifying a time (7:30 p.m.), place (fire pits) and date (May 22). “Slide tru this Saturday we finna turn up!!!!” read the bottom of the image, which was titled “Adrian’s Kickback.”

“It was meant to be for my school,” Mr. Lopez said.

In an attempt to drum up more interest, Mr. Lopez’s friend, Yahir Hernandez, 16, posted the flier to Snapchat, then to his personal TikTok account. “Tuesday morning was when Yahir made the TikTok,” Mr. Lopez said. “I was on my way to school and it only had like 40 likes, so I ignored it.” But over the next few days the video took off. Something about the specifics of the invite felt hilarious to those who encountered it. “Who is Adrian?” people commented.

The video took hold on TikTok’s powerful “For You” recommendation algorithm and gained mass distribution. Overnight, it became a meme. Internet celebrities and creators including the music artist 24kGoldn, members of FaZe Clan and Noah Beck posted about it. By the weekend of the event, TikTok videos with the hashtag #adrianskickback had attracted nearly 280 million views.

But Friday night, they began to get nervous. People were posting about flying in from around the country for the event. One person said they were driving 18 hours with a group of people to be there. And on Friday night, the night before the kickback, around 1,000 people showed up to Huntington Beach looking for a party. The police quickly shut it down, but Mr. Hernandez and Mr. Lopez no longer felt in control.

Worried they’d get in trouble for inciting a riot, Mr. Hernandez began working with an older friend he’d met in the events business. “We honestly got scared, so we thought about the idea of getting a venue,” said Mr. Hernandez.

They partnered with the popular sneaker and streetwear store Cookies N’ Kicks to sell $40 tickets to the event, and changed the location to an undisclosed space in Los Angeles to be revealed shortly before the party.

On Saturday afternoon, a line of kids waiting to buy tickets to Adrian’s kickback at Cookies N’ Kicks stretched around the block. Teenagers in line said that they believed it would be the party of the century and that they’d heard top content creators would be making appearances.

Connor Hickman, 16, who came to Huntington Beach on Saturday, echoed that sentiment. “Because of Covid most everyone’s been inside for a year. My school has been online until about two months ago,” he said. “We were welcoming the opportunity to get outside and do something fun.”

Because of the viral nature of the event, it also attracted content creators. YouTubers, TikTokers and live streamers went to make posts about it for the millions at home who couldn’t attend. Jamar Zelaya, a 19-year-old YouTuber who was waiting outside Cookies N’ Kicks on Saturday, planned to capture footage for his channel. “The chaos, the entertainment, the electricity — people want to see people wild out and look stupid,” Mr. Zelaya said. “If you don’t go, you’re missing out on history.”

A 14-year-old content creator known as Donlad, who has dubbed himself “the richest kid in America,” organized a limousine to take Mr. Lopez, Mr. Hernandez and their friends into Los Angeles for Saturday night’s festivities. “I saw this on TikTok and I was like OK, I want to hop in on this,” he said. “I don’t just want to go to the kickback, I gotta meet this kid.”

Given teenagers’ outsize expectations of the event, it was always bound to disappoint, but signs of real trouble began to show on Saturday evening. Mr. Lopez and Mr. Hernandez had said that they’d be announcing the address for the kickback venue at 9:30 p.m., but when the time rolled around, they pushed it back to 11:30 p.m., leaving teens who had traveled into the city anxious.

Meanwhile, many other people had not gotten word that the event had been moved to Los Angeles and a crowd began to grow at Huntington Beach. Thousands of teenagers poured onto the beach ready for a party. They formed a mosh pit, blasted music and cheered as some took turns scaling a flagpole and climbing on top of a stoplight. Some set off fireworks, ran through the traffic intersections, or jumped from high locations into the crowd below.

Emily McIntosh, 19, a hostess at the restaurant Duke’s in Huntington Beach, said that employees were stuck inside the eatery for hours after closing because the situation outside became too dangerous to leave. “It was kind of scary, I drove through with my roommates,” said Ms. McIntosh.

When the police began trying to disperse the crowd, things turned violent. The windshield of a police car was smashed and some people threw bottles and other objects at the police. The police shot nonlethal rounds into the crowd. Eventually, the authorities issued an emergency overnight curfew and nearly 150 attendees were arrested.

Back in Los Angeles, Mr. Lopez’s official kickback was also doomed. The address, which was never officially shared with ticket holders, leaked. By midnight, a crowd had shown up at the venue. After a police officer responded to the scene, the party was shut down before it even began.

By then, Mr. Lopez had deleted all of his content from social media in an effort to tamp down on the event, but the backlash had already begun. “I’m nervous,” Mr. Lopez said on Saturday. “My parents don’t know and they’re going to find out,” he said, “so, Mom and Dad, I’m sorry but I don’t know what to do.”

Mr. Hernandez spent Sunday afternoon trying to dispel the notion that the party was a scam. He organized refunds to those who had purchased tickets through Cookies N’ Kicks and on Sunday another line of kids formed at the store to get their money back. On Monday, Mr. Lopez released a statement through a manager he began working with the day before. “I did not start or encourage any illegal activities!” Mr. Lopez said in a statement sent via email. “Safety is and will always be my #1 concern for both myself and others. I have not made any money related to Adrian’s Kickback.”

Kai Watson, 20, content director of The Sync, a podcast network, was at Huntington Beach on Saturday and described the scene as a “zombie apocalypse” of “17 to 19 year olds.” “I think it was a mix of timing, the vaccine rollout and a lot of things opening up,” he said.

Social media has spurred similar mob-like events before. In 2012, rioting broke out in the Netherlands after a 15-year-old girl created a public invitation to her 16th birthday party on Facebook. In 2016, over a million people R.S.V.P.’ed to a quinceañera celebration for Rubi Ibarra Garcia, a teenager in Mexico, after her father accidentally set the Facebook event to public. In 2019, dozens of U.F.O. enthusiasts showed up to a site in Nevada after a viral Facebook event advertising a “raid” of Area 51 went viral on TikTok.

“This really shows the power of TikTok,” said Isaiah Shepard, 21, a YouTuber known as Steezy Kane who went to Huntington Beach on Saturday night. “Someone can make a joke and it can randomly catch traction and bring thousands of strangers to a beach in a matter of days.”

Mr. Watson said that he believes there will be more mass mobilizations as more people leverage the accelerated reach of the platform. “Seeing what happened because of TikTok in the course of less than a week, it’s a feeling that I’ve never experienced before with social media,” he said. “If anyone is able to recreate even one percent of what was done this week for Adrian’s kickback with something that has more importance, such as for a political candidate or protest, that would be amazing.”

On Monday, however, Mr. Lopez’s manager said his client’s mood had changed. “The last thing Adrian wants to do is party,” said his manager, Estevan Lopez, 20, who is of no relation. “But this may be the beginning of his career as an influencer.”

Apple Has to Try Hard Now

If Apple were a person, it wouldn’t be the type who runs to catch a flight and skids up to the gate in...
Read more
Tech

GÖTTINGEN, Germany — The European Union was finalizing one of the world’s most far-reaching laws to address the power of the biggest tech...
Read more
Tech

How Facial Recognition Is Being Used in the Ukraine War

In the weeks after Russia invaded Ukraine and images of the devastation wrought there flooded the news, Hoan Ton-That, the chief executive of...
Read more