Home Business Why Are Jobless Claims Still High? For Some, It’s the Multiple Layoffs.
Business

Why Are Jobless Claims Still High? For Some, It’s the Multiple Layoffs. 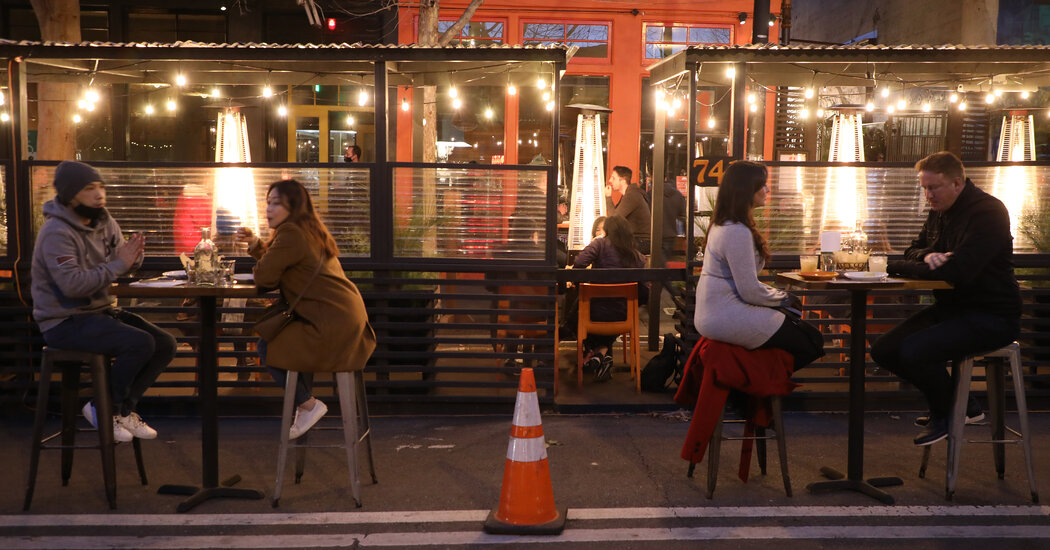 Jobs are coming back. Businesses are reopening. But a year after the pandemic jolted the economy, applications for unemployment benefits remain stubbornly, shockingly high — higher on a weekly basis than at any point in any previous recession, by some measures.

And headway has stalled: Initial weekly claims under regular and emergency programs, combined, have been stuck at just above one million since last fall, and last week was no exception, the Labor Department reported Thursday.

“It goes up a little bit, it goes down, but really we haven’t seen much progress,” said AnnElizabeth Konkel, an economist for the career site Indeed. “A year into this, I’m starting to wonder, what is it going to take to fix the magnitude problem? How is this going to actually end?”

The continued high rate of unemployment applications has been something of a mystery for many economists. With the pandemic still suppressing activity in many sectors, it makes sense that joblessness would remain high. But businesses are reopening in much of the country, and trends on employment and spending are generally improving. So shouldn’t unemployment filings be falling?

New evidence from California may offer a partial explanation: According to a report released Thursday by the California Policy Lab, a research organization affiliated with the University of California, nearly 80 percent of the unemployment applications filed in the state last month were from people who had been laid off earlier in the pandemic, gotten back to work, and then been laid off again.

Such repeat claims were particularly common in the information sector — which in California includes many film and television employees who have been sidelined by the pandemic — and in the hard-hit hotel and restaurant industries, as well as in construction.

The Policy Lab researchers had access to detailed information from the state that allowed them to track individual workers through the system, something not possible with federal data.

California’s economy differs from that of the rest of the country in myriad ways, and the pandemic has played out differently there than in many other places. But if the same patterns hold elsewhere, it suggests that the ups and downs of the pandemic — lockdowns and reopenings, restrictions that tighten and ease as virus cases rise and fall — have left many workers stuck in a sort of limbo.

A restaurant may recall some workers when indoor dining is allowed, only to lay them off again a few weeks later when restrictions are reimposed. A worker may find a temporary job at a warehouse, or pick up a few hours of work on a delivery app, but be unable to find a more stable job.

“This shows the oscillation of employed, unemployed, employed, unemployed — people cycling back into the system,” said Elizabeth Pancotti, policy director at Employ America, a group in Washington that has been an advocate for the unemployed. “We did not see that in previous recessions.”

What that instability will mean for workers’ long-term prospects remains unclear. Economic research has found that extended periods of unemployment can leave workers at a permanent disadvantage in the labor market. But there is little precedent for a period of such prolonged instability.

The California data shows how the economic effects of the pandemic have been concentrated among certain industries and demographic groups — and how the consequences continue to mount for the most affected workers, even as the crisis eases for many others.

Nearly 90 percent of Black workers in the state have claimed unemployment benefits at some point in the pandemic, according to the Policy Lab analysis, compared with about 40 percent of whites. Younger and less-educated workers have been hit especially hard.

Those totals include filings under the federal Pandemic Unemployment Assistance program, which covers people left out of the regular unemployment system, a group that disproportionately includes Black workers. The record-keeping for that program has been plagued by overcounting and fraudulent claims. But even a look at the state’s regular unemployment insurance program, which hasn’t faced the same issues, reveals remarkable numbers: Close to three in 10 California workers have claimed benefits during the crisis, and more than four in 10 Black workers.

“That degree of inequality is mind-blowing,” said Till von Wachter of the University of California, Los Angeles, one of the report’s authors.

Many of those who lost jobs early in the crisis have since returned to work. But millions have not. The Policy Lab found that nearly four million Californians had received more than 26 weeks of benefits during the pandemic, a rough measure of long-term unemployment.

“We have solidly shifted into a world where a large-scale problem of long-term unemployment is now a reality,” Dr. von Wachter said. Black workers, older workers, women and those with less education have been more likely to end up out of work for extended periods.

Nationally, nearly six million people were enrolled as of late February in federal extended-benefit programs that cover people who have exhausted their regular benefits, which last for six months in most states. The aid package signed by President Biden last week ensures that those programs will continue until fall, but benefits alone won’t prevent the damage that prolonged joblessness can do to workers’ careers and mental and physical health.

“The recovery needs to be on the scale of being a once-in-a-generation economic upswing to really pull those people back into the labor market,” Ms. Konkel said.

The latest data provides little sign of that happening. More than 746,000 people filed first-time applications for state unemployment benefits last week, up 24,000 from the previous week, according to the Labor Department. In addition, 282,000 filed for Pandemic Unemployment Assistance.

Most forecasters expect the labor market recovery to accelerate in coming months, as warmer weather and rising vaccination rates allow more businesses to reopen, and as the new injection of government aid encourages Americans to go out and spend. Policymakers at the Federal Reserve said on Wednesday that they expected the unemployment rate to fall to 4.5 percent by the end of the year, a significant upgrade over the 5 percent they forecast three months ago.

“We’re already starting to see improvement now, and I think that will start to accelerate fairly quickly,” said Daniel Zhao, an economist at the career site Glassdoor.

But government aid can do only so much as long as the pandemic continues to limit consumers’ behavior. The pace of the recovery now, Mr. Zhao said, depends on a factor beyond the scope of normal economic analysis.

“The dominating factor right now is how quickly we can get vaccines in arms,” he said.