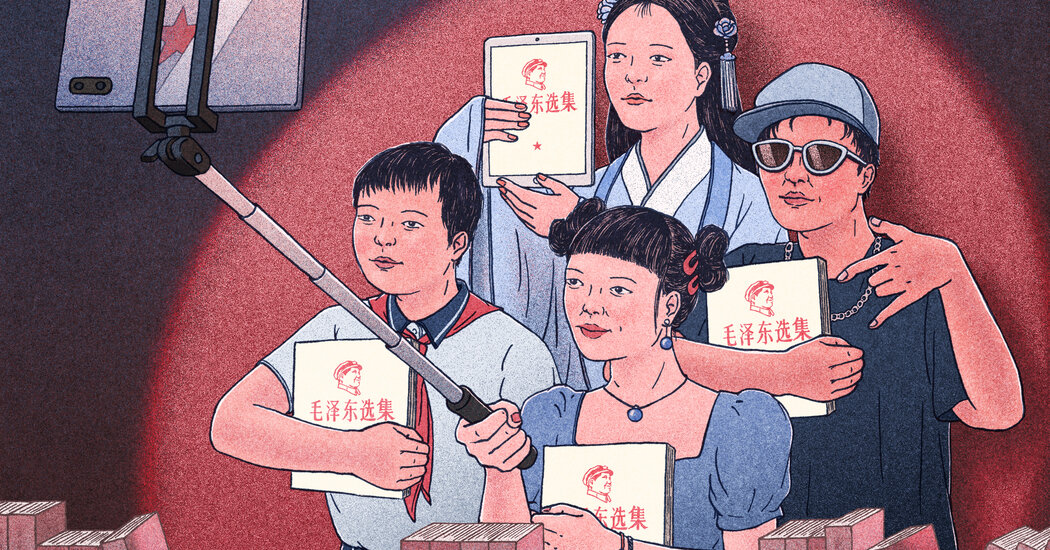 They read him in libraries and on subways. They organized online book clubs devoted to his works. They uploaded hours of audio and video, spreading the gospel of his revolutionary thinking.

Chairman Mao is making a comeback among China’s Generation Z. The Communist Party’s supreme leader, whose decades of nonstop political campaigns cost millions of lives, is inspiring and comforting disaffected people born long after his death in 1976. To them, Mao Zedong is a hero who speaks to their despair as struggling nobodies.

In a modern China grappling with widening social inequality, Mao’s words provide justification for the anger many young people feel toward a business class they see as exploitative. They want to follow in his footsteps and change Chinese society — and some have even talked about violence against the capitalist class if necessary.

The Mao fad lays bare the paradoxical reality facing the party, which celebrated the centenary of its founding last week. Under President Xi Jinping, the party has made itself central to nearly every aspect of Chinese life. It claims credit for the economic progress the country has made and tells the Chinese people to be grateful.

At the same time, economic growth is weakening and opportunities for young people are dwindling. The party has nobody else to blame for a growing wealth gap, unaffordable housing and a lack of labor protections. It must find a way to placate or tame this new generation of Maoists that it helped create, or it could face challenges in governing.

“The new generation is lost in this divided society, so they will look for keys to the problems,” a Maoist blogger wrote on the WeChat social media platform. “In the end, they’ll definitely find Chairman Mao.”

In interviews and online posts, many young people said they could relate to Mao’s analysis of Chinese society as a constant class struggle between the oppressed and their oppressors.

“Like many young people, I’m optimistic about the country’s future but pessimistic about my own,” said Du Yu, a 23-year-old who is suffering from burnout from his last job as an editor at a blockchain start-up in the tech-obsessed Chinese city of Shenzhen. Mao’s writing, he said, “offers spiritual relief to small town youth like me.”

Chinese technology workers are often expected to work 9 a.m. to 9 p.m. six days a week, a practice so common that they call it “996.” Mr. Du’s schedule was worse. After he slept only five hours over three days late last year, his heart raced, he was short of breath and he grew sluggish. He quit shortly after. He hasn’t looked for a job in three months and seldom ventures outside. A doctor diagnosed mild depression.

“Most of my peers I know still want to succeed,” Mr. Du said. “We’re simply against exploitation and meaningless striving.”

While Mao never went away, he was once out of fashion. In the 1980s, as freedom and free markets became buzz words, young people turned to books by Friedrich Nietzsche, Jean-Paul Sartre and Milton Friedman. Studying Mao was required in school, but many students blew off those lessons. After the 1989 Tiananmen Square crackdown, martial arts novels and books by successful entrepreneurs dominated best-seller lists.

But China has become fertile ground for a Mao renaissance.

Nominally a socialist country, China is one of the world’s most unequal. Some 600 million Chinese, or 43 percent of the population, earn a monthly income of only about $150. Many young people believe they can’t break into the middle class or outearn their parents. The lack of upward social mobility has made them question the purity of the party, which they believe is too tolerant of the capitalist class.

The party’s growing presence in everyday life has also opened doors for Maoism. Intensifying indoctrination under Mr. Xi has turned the youth both more nationalistic and more immersed in Communist ideology.

New catchphrases among the young reveal this Mao-friendly mind-set. With wages stagnant, young people talk about a “consumption downgrade.” Their employers work them so hard that they call themselves “wage slaves,” “corporate cattle” and “overtime dogs.” A growing number are saying they would rather become slackers, using the Chinese phrase “tang ping,” or “lie flat.”

Those attitudes have helped make the five volumes of “The Selected Works of Mao Zedong” popular again. Photos of fashionably dressed young people reading the books on subways, at the airports and in cafes are circulating online. Students at the Tsinghua University library in Beijing borrowed the book more than any others in both 2019 and 2020, according to the library’s official WeChat account.

“I’ll definitely reread the ‘Selected Works’ again and again in the future,” a young blogger named Mukangcheng wrote on Douban, a Chinese social media service focused on books, film and other media. “It has the power to make a person searching in darkness see the light. It makes my weak soul strong and broadens my narrow worldview.”

Mukangcheng, who declined to give me his real name, uses an email account named “Left Left.” His portrait is a red Mao badge. His posts concern high pork prices and lack of money for his phone bills. In 2018, when he visited the site of the Communist Party’s first national congress in Shanghai, he wrote on the visitors’ book, quoting Mao, “Never forget class struggle!”

Others commenting online about “Selected Works” said they saw themselves in the young Mao, an educated village youth from a backwater province trying to make it in the early 1900s in the big city then known as Peking. They usually call Mao “teacher,” a term he preferred to call himself.

Many social media users like to quote the first sentence of the first volume. “Who are our enemies? Who are our friends?” Mao wrote in 1925. “This is a question of the first importance for the revolution.”

Many say their biggest enemies are the capitalists who exploit them. The biggest target of their ire is Jack Ma, the co-founder of the Alibaba e-commerce empire. He was once cheered as the embodiment of the Chinese dream. Now they jeer at his comments supporting the 996 work culture and saying business itself is the biggest philanthropy.

“Workers are only moneymaking tools for people like him,” said Xu Yang, 19, who went as far as to say people like Mr. Ma “need to be eliminated physically and spiritually.” Mr. Ma later walked back his remarks, saying he wanted only to pay tribute to workers who put in long hours out of love for their jobs.

Similar online calls for violence against capitalists — such as the French Revolution’s cry to hang the aristocrats from lampposts, “à la lanterne!” — go uncensored on China’s internet.

Mr. Xu, a high school graduate in southern Zhejiang Province who wants to major in fashion design in college, said he read Mao because he wanted to change China for the better. The portrait on his Douban account is an old poster of Marx, Engels, Lenin, Stalin and Mao with the slogan, “Long live Marxism-Leninism-Mao Zedong Thought!” “A revolutionary proletarian soldier,” his bio reads.

The Maoist youths’ anti-establishment sentiment doesn’t stop at the capitalist class. The radical ones are also questioning why the party allowed deepening social inequality.

“Didn’t the proletariat win the revolution?” Mr. Xu asked. “But why are the masters of the country now at the bottom while the targets of the proletarian dictatorship are on top? What has gone wrong?”

After a classmate introduced Mao’s books to him last year, Mr. Xu sought out dark facts about China by using software to visit censored websites. He learned how the Chinese government had crushed the efforts of young Marxist activists to help workers organize labor unions and arrested a meal-delivery worker who organized his peers to seek better labor rights protection.

“The bureaucracy and the capital are highly integrated,” he said. “Our rebellion is unlikely to stop at the capitalists.”

The government is wary of the intensifying sentiment and has begun censoring some Maoist posts and discussions. A widely circulated and since-deleted article analyzed why Mao’s revolution was unlikely to succeed in China today. The reasons: government surveillance and background screening.

“People like Mao could write in newspapers 100 years ago,” Mr. Xu said. “Now if we make any loud noises, we could disappear instantly.”