Home Business Why Do We Make Things So Hard for Renters?
Business

Why Do We Make Things So Hard for Renters? 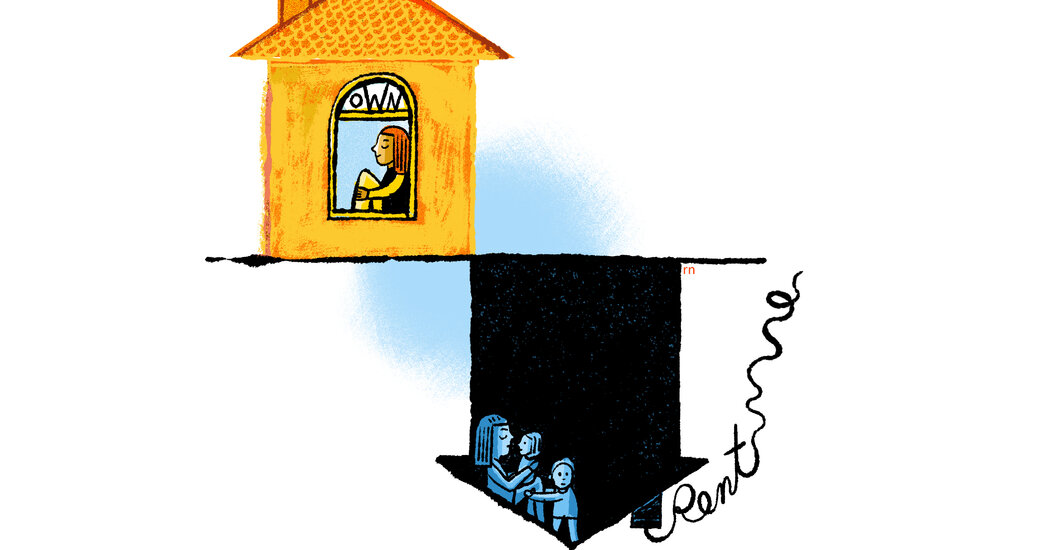 For struggling homeowners in the pandemic’s first year, there was hope early on that these hard times would not put people with mortgages out in the street.

Thanks to quick governmental action, homeowners quickly got word that most of them could put off monthly payments for as much as 18 months — and even have the option to make them up as much as 40 years later.

Sure, there were federal and regional eviction moratoriums, but it took nearly a year for Congress to come through with actual payment assistance, and that has only trickled out so far. Plus, it came with a host of restrictions and hurdles to clear — heaped on top of a population where millions were already in a precarious financial position.

We should say it out loud: When it comes to public policy, people who do not own their own homes are treated like second-class citizens.

If you can’t afford to buy (or choose not to), you miss out on numerous tax incentives. Then, when an extended crisis hits, your very ability to have a roof over your head is subject to the sort of sloppy political brinkmanship that allowed the eviction moratorium to expire before it was partially restored.

So how did this happen and why? And what will we learn from it?

Let’s begin with the baseline: For decades — and for pretty good reasons, given the wealth-building possibilities that come from homeownership — the federal government has goosed the mortgage market in a variety of ways. Lenders have the backing of the federal government, and homeowners can get deductions for their monthly payments, plus favorable tax treatment on any long-term appreciation of a home.

But whether for lack of imagination or lack of will, little national infrastructure exists to help the majority of renters. It is a glaring deficiency exemplified by this year’s slow-as-molasses distribution of $47 billion of rental assistance. Only about $3 billion had been handed out by the end of June.

Many mortgage borrowers, at least in theory, have access to a one-call-does-it-all payment pause button via their mortgage servicer. Their relative good fortune is an improvement born of the mess that was the last financial crisis. Back then, the collapse of the housing market led to a crushing wave of foreclosures, in part because people seeking loan modifications faced unfathomable complexity.

Renters, however, now face something that policy experts have come to call an “administrative burden.”

The phrase refers to a harrowing series of hurdles that tenants — often low-income people — must meet when accessing any sort of assistance, like the rental aid that has moved so glacially.

In their book on this phenomenon and other scholarship, the Georgetown University professors Pamela Herd and Donald Moynihan outline three of the leaps that are necessary to overcome such burdens.

First is awareness. To get help, you need to know that it’s available in the first place. As of May, months after rental aid came into existence, 57 percent of tenants and nearly 40 percent of landlords didn’t even know about it, according to an Urban Institute survey.

Then, there is eligibility. Rental assistance comes with rules, which aren’t always easy to navigate. It becomes even harder if you’re frazzled because of unemployment, shuttered child and elder care, or illness.

It can be difficult to find someone who can explain it all. Homeowners have their mortgage servicers to assist. Businesses that received the forgivable and relatively expedient loans from the Paycheck Protection Program had their bankers. Many precarious renters have no such help.

“For someone who is facing eviction, trying desperately to figure out how to apply, which forms to fill out, where you need to go, you can quickly see how that is just kind of brutal,” Professor Herd told me this week.

Finally, there is compliance. The forms have to be complete and submitted correctly. And in the case of rental assistance, landlords in many places have to cooperate by agreeing to accept the money the government is offering.

There have been other problems, too, with the rental assistance program and other similar ones. For example, a balky computer system might reject applicants inexplicably.

“It mistook them for someone else or denied them when they were eligible for back benefits,” said Emily Benfer, a visiting professor at Wake Forest University School of Law who has seen such problems repeatedly over the years when representing clients. Each improperly denied application “takes months to correct and has significant costs, not just in lost support but in the time and energy that it takes when you could be using that to stabilize yourself and your family.”

There are many reasons — too many — that we erect higher burdens for those with lower incomes. There are the historical, and in many instances racially motivated, assumptions about who is deserving. Fear of fraud exists, which is reasonable to a degree but is problematic when it delays aid during an acute crisis.

Sometimes it comes down to governmental ignorance.

“The programs are designed by people who are not themselves poor and done without any consultation with those people, either,” said Peter Hepburn, an assistant professor at Rutgers University-Newark who also works with the Eviction Lab program at Princeton. The result can be crucial flaws, such as optimizing forms for people with computers and printers, when using a mobile phone might be easier and faster — not to mention the only realistic possibility — for lots of the people in need.

And finally, we have political considerations, always and forever. Low-income renters lack power, and elected officials know it.

“Even if you do realize that this is not going to be a great experience when you try to access benefits, you’re probably not that worried about it politically,” Professor Herd said.

So what might we learn? And what could actually go right the next time, say, a massive hurricane puts much of South Florida in a standstill?

First, research from the Eviction Lab program shows that a relatively small number of landlords appear to be responsible for an outsize share of eviction filings in any given community. Forward-thinking officials could focus their outreach — and enforcement efforts, if necessary — on those people.

Data is crucial, too. In order to quickly reach those in need, agencies at every level of government could share resources to cobble together better directories of renter addresses in areas of vulnerability. That would give them a running start when it comes time to push out aid.

Then, there is kindness.

Elizabeth Linos, an assistant professor of public policy at the University of California, Berkeley, and founder of the People Lab there, learned the benefit of that in recent months when helping officials in the Denver area test the city’s outreach to renters. She and her colleague Jessica Lasky-Fink prepared two different mailings to a batch of residents they believed might need rental and utility assistance.

One note was a standard government mailing. The other emphasized that their predicament was not their fault and that municipal workers would help “every eligible household get the assistance they deserve.”

“We do treat poverty as a moral failing in the United States,” Professor Linos said. “Maybe it’s not so obvious that if you need assistance for the first time that it doesn’t make you a bad person.”