Why ‘Kim’s Convenience’ Is ‘Quietly Revolutionary’ 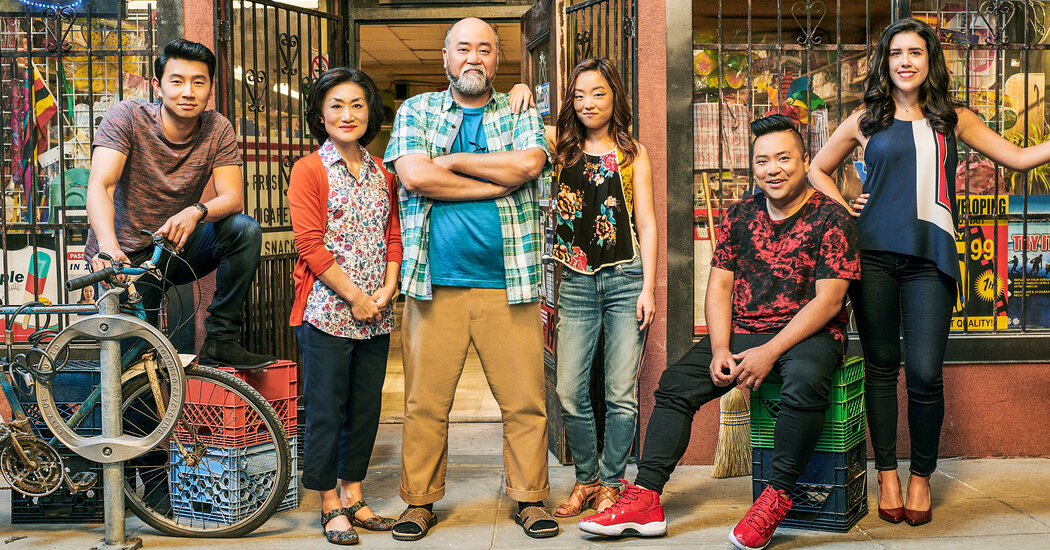 In the second episode of the television show “Kim’s Convenience,” there’s a moment that has always stuck with Diane Paik.

Umma, the matriarch of the Kim family, arrives at the apartment of her son, Jung, carrying containers of kimbap.

It’s not a particularly pivotal scene, but it immediately brought Ms. Paik, 30, a senior social media manager for the men’s grooming company Harry’s, back to the many times her own parents drove 10 hours from their home in West Bloomfield, Mich., to her apartment in Bedford-Stuyvesant, Brooklyn, always with their homemade kimchi in tow.

Bringing food is her mother’s love language, she said — an unspoken way that Korean parents show affection by ensuring that their children’s kitchens are stocked with home-cooked meals.

The scene resonated with her for another reason. “There is no explanation or embarrassment” about the food, Ms. Paik said. “It is not so much, ‘Hey, we are Korean and we are going to remind you all the time through all these ways we are Korean.’ It is just like, this is a family that happens to be Korean.”

“Kim’s Convenience,” a CBC Television sitcom based on a play of the same name about a Korean Canadian family who own a convenience store in Toronto, is not about food, per se. But the show stands apart for the way it has normalized Korean cuisine and culture throughout its five-season run. (The fifth and final season arrives on Netflix internationally on Wednesday.)

“It takes the foreignness and otherness out of Korean food,” said June Hur, 31, an author in Toronto. “It’s just food and people love it.” Seeing this on television “makes me proud of my heritage,” she added. “Before, I was not as much.”

For decades, Asian cuisines have been played for laughs on television. In a 1977 episode of the detective sitcom “Barney Miller,” Stan “Wojo” Wojciehowicz tells his colleague Nick Yemana that his lunch of fish head soup “smells like garbage.” A 1974 episode of “Sanford and Son” has Fred Sanford comparing the smell of sake to sweat socks at a dinner with members of a Japanese real estate firm.

James Park, 27, a social media manager at the food website Eater, noticed that in contemporary portrayals of nonwhite characters, what used to be embarrassment or shame had transformed into calling out or explaining certain foods. In the 2018 romantic comedy “Crazy Rich Asians,” the camera zooms in on the male lead, played by Henry Golding, as he pleats a dumpling. He explains the technique to his Chinese American girlfriend, played by Constance Wu, but it’s the audience that’s getting the lesson. In 2018’s “To All the Boys I’ve Loved Before,” the Korean American protagonist, played by Lana Candor, describes Yakult, a popular drink among Koreans, to her boyfriend as a “Korean yogurt smoothie.”

Those explanations can be helpful to viewers who are unfamiliar with this food. But in not prioritizing people who have not heard of kimbap or kimchi jjigae, “Kim’s Convenience” makes its story lines and characters feel more universal.

Viewers, regardless of their background, can focus on the similarities between themselves and the Kims, not the differences, said Dale Yim, the manager of his family’s Korean restaurant in Toronto, Song Cook’s, and an actor who played Jung in the stage version of “Kim’s Convenience.” The Kims’ Korean identity “is accepted as just matter of fact, and they move on and get to the deeper themes,” he said.

“Kim’s Convenience” premiered on CBC in 2016, winning a loyal viewership and several Canadian Screen Awards. Like the Canadian comedy series “Schitt’s Creek,” its following grew exponentially when “Kim’s Convenience” debuted on Netflix — in “Kim’s” case, in 2018. When its co-creator, Ins Choi (who declined to be interviewed for this article) announced in March that the show’s fifth season would be its last, the outcry on social media was immense. Even the Canadian prime minister, Justin Trudeau, tweeted his thanks for the run.

While the show reaches a wide audience, its framing around food has made it especially meaningful to members of the Korean diaspora.

Irene Yoo, a Brooklyn chef and YouTube host, said that after seeing so many immigrant narratives told through the lens of historical trauma, she loved “being able to see my stories and my food sort of gently and casually referenced” in a way that has usually been reserved for shows about white families. She called that “quietly revolutionary.”

Her favorite episode centers on the daughter, Janet (played by Andrea Bang), and her struggle to recreate her mother’s bindaetteok.

Ms. Yoo said the segment spoke to a very specific insecurity she has felt, as a second-generation immigrant, about certain Korean ingredients that feel unfamiliar to her even as someone who was raised on this food. “It felt very empowering” to see Janet make bindaetteok her own, Ms. Yoo said, just as she has done for some of her mother’s Korean dishes. “I have to do my own discovery.”

Jay Lee, the chief executive of the Toronto consulting company Radical Business Growth, and the founder of the Facebook group Friends Who Like Kim’s Convenience, recalled the episode when Umma (played by Jean Yoon) brings kalbi jjim, a special-occasion dish, to a church bazaar to one-up her rival.

Mr. Lee, 46, attended a Korean church while growing up, and said he had never seen a show so realistically portray that experience.

As a child, he’d go to the basement of his church after services with his grandmother and find all the other grandmothers trading seeds for various vegetables. “It was a way of coming together and showing love and showing up,” he said, interpersonal politics and all. That scene “took me right back. I recognized that church scene as my own church scene.”

These moments may refer to particular aspects of Korean culture, but being competitive about cooking or trying to prepare a childhood dish are relatable experiences.

“It is just another reminder that shows that really focus on a certain community do not lose humanity for anyone outside of that community,” said Ms. Paik, the social media manager.

Yet what Mr. Park, of Eater, loves most about the show is that there are certain culinary references that non-Koreans simply won’t understand. When Umma and Appa (played by Paul Sun-Hyung Lee) go out to dinner, leaving Janet — and eventually Jung (played by Simu Liu) — to tend to the store, Umma makes kkori gomtang for dinner. It’s a time-intensive oxtail dish that Korean mothers might make when they are going to be away for a while, he explained, as it’s easy to reheat and improves in flavor over time. He added that his own mother would often leave big pots of gomtang for his brother and him to eat while she was at work.

“If you don’t know what they are talking about, you wouldn’t even get it,” he said. “But for Koreans who grew up with those menus and the kind of context and meaning behind why mom makes these kinds of dishes, it hits harder.”

“American shows need to take note,” Mr. Park added. The way “Kim’s Convenience” centers nonwhite experiences, he said, should serve as a blueprint for any on-screen representation of immigrant characters.

“It feels refreshing,” he said. It “doesn’t make you feel like just another stereotype.”